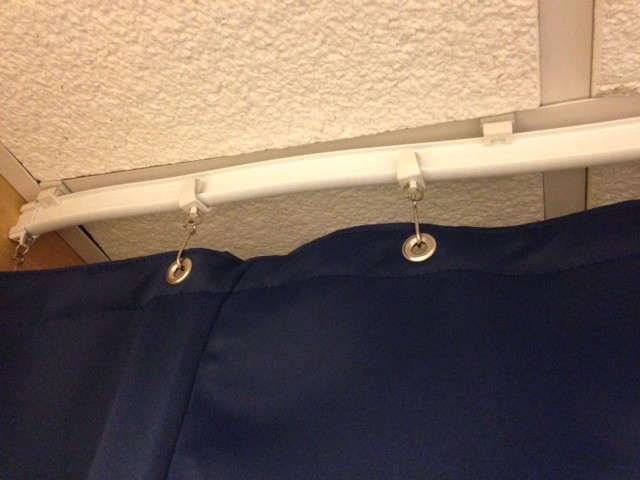 By Curtain-Tracks 6 years ago 2082 Views No comments

We believe that small changes can make big differences, and you might be surprised how much curtain tracks in your basement can affect the whole space. They can be used to cover up a storage area or the water heater to make the room look neater, or you can use a curtain as a virtual wall to create “his” space (man cave?) and “her” space (crafting area?). Curtain tracks in your basement might even be useful in keeping away the boogeyman… One of our customers, Carrie D., from Ohio, recently shared with us a story about her basement and curtain tracks. She and her husband had a portion of their basement finished so they could use it as a play/video game room for their two sons. Due to poor planning the door between the finished and unfinished part of the basement could not be opened fully. After a few attempts to move something large through a doorway that would only open half-way, the client decided to simply remove the door. Shortly afterwards she noticed that both her boys, ages ten and twelve, were reluctant to spend any time in the basement alone. When she pressed them on this they admitted that the perpetually open door to the “creepy” part of the basement unnerved them. Tired of sharing her TV time with the boys (she could take only so much “Amazing World of Gumball”), and wanting to get the most out of the money spent on the basement, she turned to curtain tracks to solve her problem.

A 6100 Flexible Curtain Track, some 6155 Ceiling Clamps, 6111 Carriers, 7142 Curtain Hooks, an Eclipse fabric privacy curtain, and a few other various pieces of drapery hardware created what the basement builders could not – a transition from finished to unfinished space that can be fully opened and closed. As a bonus, she purchased a deep navy blue curtain panel to add some color to a room that was otherwise rather bland. Carrie is looking forward to having the living room TV to herself again.