Based on feedback from customers, we have added a metal curtain clip with a ring attached to the drapery hardware offering at Curtain-Tracks.com. The plated steel curtain clips with rings make it easy to hang a curtain or backdrop that doesn't have pleats, grommets, or other means of easily attaching a hook. The clips can be added directly to the top edge of a curtain and the rings can be looped through the holes in most curtain carriers or glides. These curtain clips can be great to hang flat curtains with pockets intended for use with curtain rods from curtain tracks instead.

I confess that I can't recall ever hearing a joke about curtain rods despite drapery hardware being the focus of our business.  I mean, how funny can drapery hardware be?  So when this one hit our email box this weekend, we got an extra laugh from it and decided we ought to share it with our readers.  It's certainly tame, so here goes...

Beat the Heat with Blackout Curtains

As much of the US endures record temperatures, it seems an appropriate time to remind our customers of an important benefit of curtains – maintaining the interior temperatures in homes and offices.  Direct sunlight shining through windows can  drastically increase the temperature of a room.  By utilizing blackout curtains at certain times of the day to block out direct sunlight can help to insulate the room and reduce the resulting heat increase.  This helps to improve the comfort level of the room, as well as save money by reducing your air conditioning costs and energy consumption.

Our customer support team gets a lot of calls and emails at Curtain-Tracks.com asking for advice on how to hang curtains or draperies on Bay Windows. Because the bay window is typically comprised of three or five separate windows oriented at angles to one another, it can create a challenge for anyone hoping to improve the appearance of their room with window treatments.

Using a Flexible Curtain Track for Your Bay Window

Spare the Rod and Spoil Yourself with Curtain Tracks

A Cold Snap You Will Enjoy: Snap Tape

Your search returned no results

Your search returned no results

Spare the Rod and Spoil Yourself with Curtain Tracks

DON'T BE THAT HOUSE

Have you ever been to someone's home and noticed their window fixtures? Like really noticed them? Perhaps you admired their decorative curtains and how they billow ever so slightly on the floor beneath the window. Or maybe you noticed their tall windows and how they have added curtain tracks on the ceiling to support the massive drapes. But have you ever noticed a curtain rod (gasp!) that has bowed in the middle? 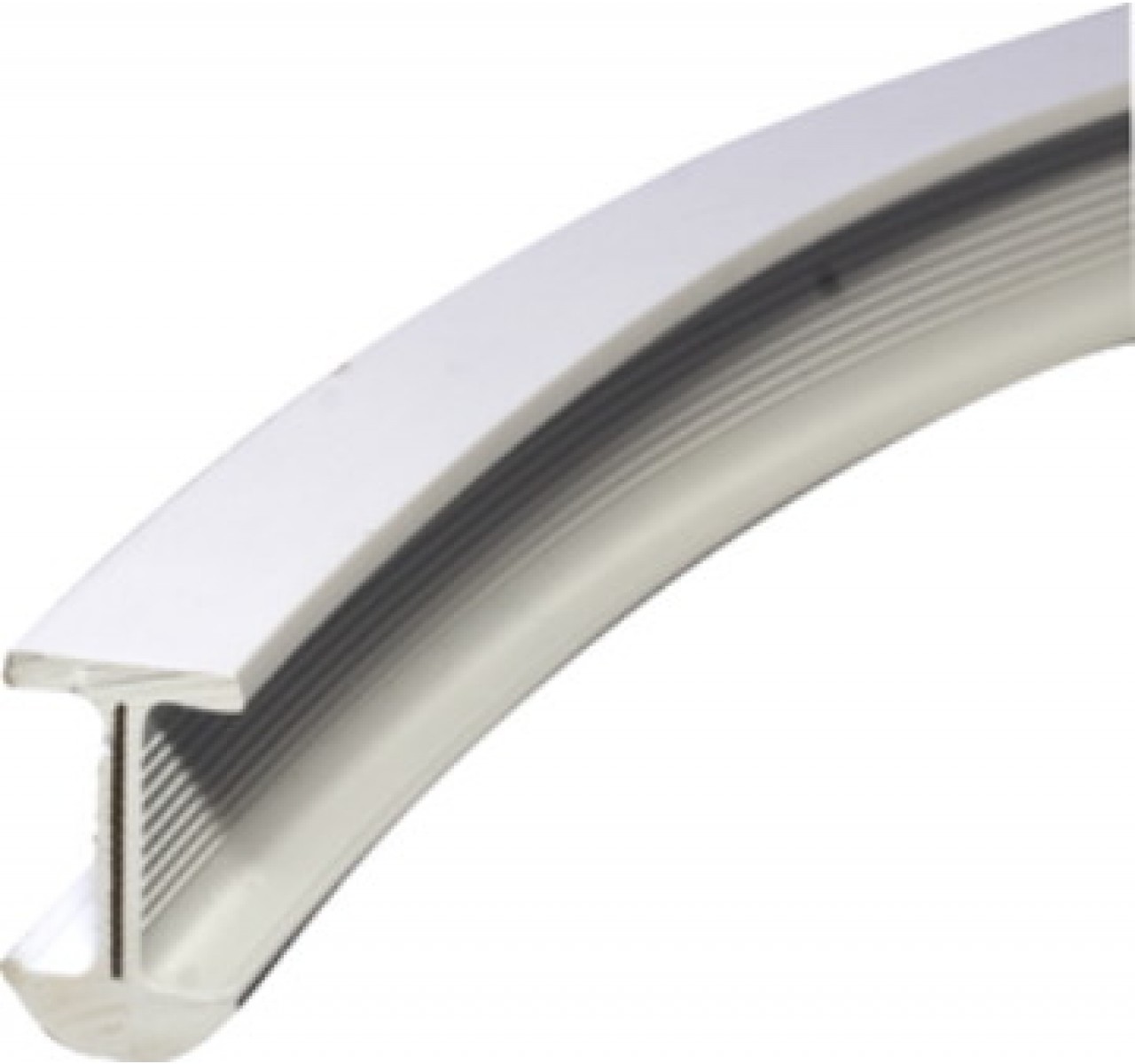 WHY YOU SHOULDN'T USE THEM

Most curtain rods are made of two pieces. One piece of the rod slides into the other which leaves a bump in the rod (that's an issue all in itself that we will talk about it in a bit). When you have a long curtain rod, a supporting bracket should be put in place in the middle to keep the rod from bending. This might solve the support issue of the curtain rods but that bracket causes a whole other problem; you can never completely close your curtains which can leave an annoying ray of light into the room when you want it to be dark.

As we mentioned above, using a curtain rod that has two (or three) pieces can cause a bump in the middle which can make easily opening and closing curtains a bit of a pain as they get caught on the rod. The easy solution to this curtain rod dilemma is simple: use curtain tracks.

One of our most popular curtain tracks is the 6100 flexible curtain track. What makes this track so special is it can be mounted to the wall or ceiling and it is bendable by hand. Sold by the foot, this track allows long continuous lengths for curved or angled applications, but can also be used for straight applications. If you are looking for a track to be recessed in the ceiling, the 3120 curtain track is the one for the job. Once you have your tracks hung, simply add carriers and your curtains will glide smoothly and easily along the entire length of track.

Ready to avoid all of the problems of using curtain rods? Give curtain tracks a try!

We are often asked why someone should choose curtain tracks over curtain rods. It's a fair question and the options can be overwhelming. Never fear! We are here to help! 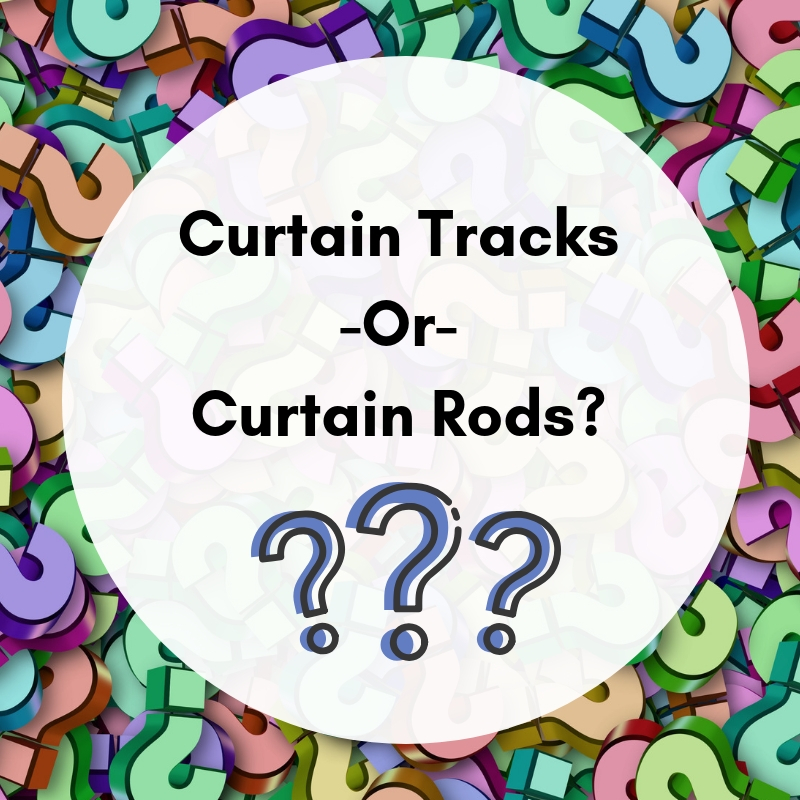 KEEP THE LIGHT OUT

If you are looking to add room darkening, sound absorbing and energy conserving eclipse light blocking curtains to a window, curtain tracks would be your best bet. Curtain tracks can be mounted on the ceiling ensuring the entire window is covered, similar to what you see in nearly every hotel room. When the entire window is covered and your curtains block the light, you are more likely to get a solid night's sleep.

If you have tall windows in your home, a curtain track system is going to be most effective. Tall windows call for curtains with lots of fabric which means added weight. With curtain rods, heavy curtains can drag the rod down (or pull it off the wall completely). Several curtain tracks work well with rolling ball carriers allowing for smooth opening and closing of the curtains. Add a wand to the curtain panels (the 60 inch wand length is great for tall curtains and high ceilings), and opening and closing just became easier and eliminates hand prints on fabric.

If you are looking to attract attention to your window, besides just the curtains, you may want to consider curtain rods. Curtain rods are available in many styles and sizes and can have decorative corbels adding a different design element to your room.

If you aren't sure if curtain tracks or curtain rods will work best for your project, give us a call or send us an email! We are happy to answer your questions.

Americans are staying home more and while they are hunkering down, they are tackling those long-awaited home improvement projects. Contractors are busier than ever and home improvement stores are bustling with DIYers. In fact, according to the Wall Street Journal, "Daily foot traffic to Home Depot stores since April has been running at least 35% above last year’s, according to Unacast Inc., which tracks location data from 25 million cellphones on any given day. In 26 states, traffic doubled following a surge in late May." If this sounds like you, read on because we have some easy and affordable updates that you can complete all on your own.

Swap out those old dated curtain rods for seamless curtain tracks and freshen up the room with new curtains. Curtain tracks, unlike rods, can be mounted to the ceiling or the wall and the smooth track allows for seamless opening and closing due to the curtain carriers or glides. These carriers help the curtains smoothly - and quietly - glide along the track, unlike large curtain rings that are often found on curtain rods. Curtain tracks are also extremely durable as they are affixed in various places along the track. With curtain rods, the bracket can easily pull out of the wall causing you to take on a whole new project: drywall repair. 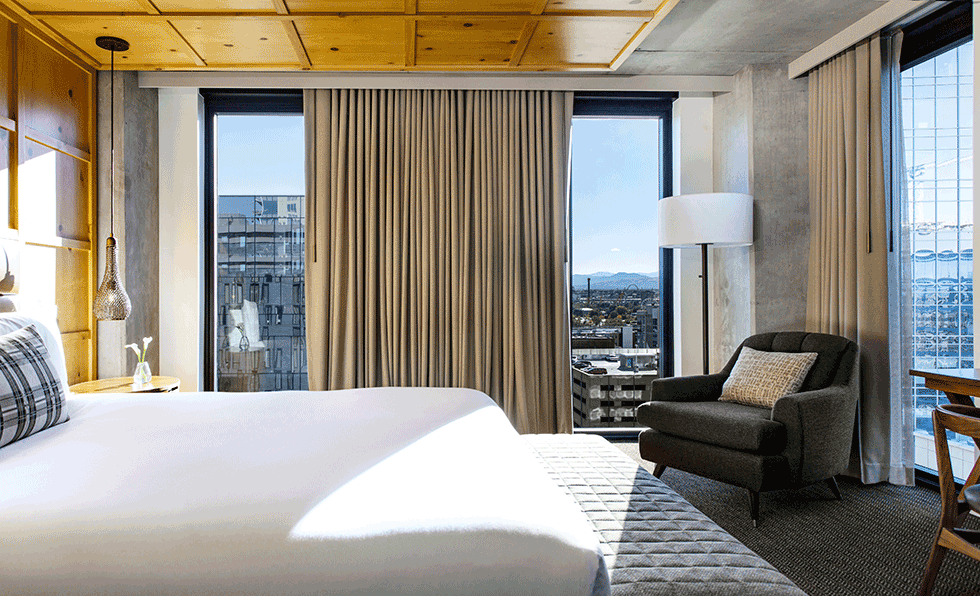 Studies show that the average person spends at least 30 minutes in the bathroom every day. If that sounds accurate to you, maybe it's time to switch out that tired curtain rod and update your bathroom by adding a ceiling mount curtain track, drop chains and a sleek new shower curtain? For many of the same reasons listed above, curtain tracks are super sturdy and they look great, plus they create a sleek, modern and fresh look to your bathroom. 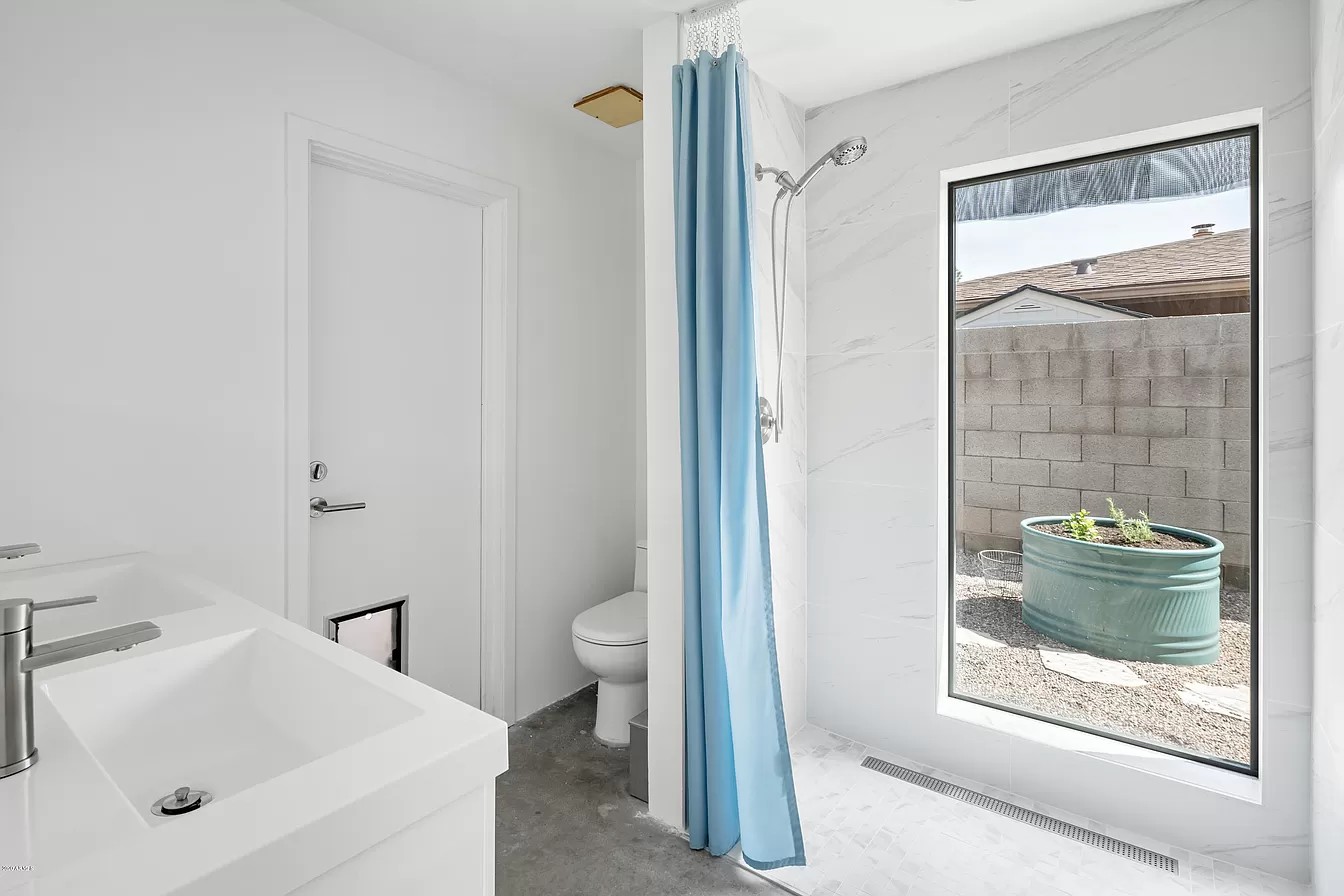 Curtain tracks aren't just for living rooms and bathrooms, they can be used outside. Adding curtain tracks and weatherproof curtains to your porch or pergola can help protect against the hot afternoon sun and windy days and they also allow for privacy. Some great products for a project like this include: the 3120 Heavy Duty Curtain Track in Silver, the 7127 Stainless Steel End Stops, 7140 Large Double Wheel Carriers and 7142 Stainless Steel Curtain Hooks. 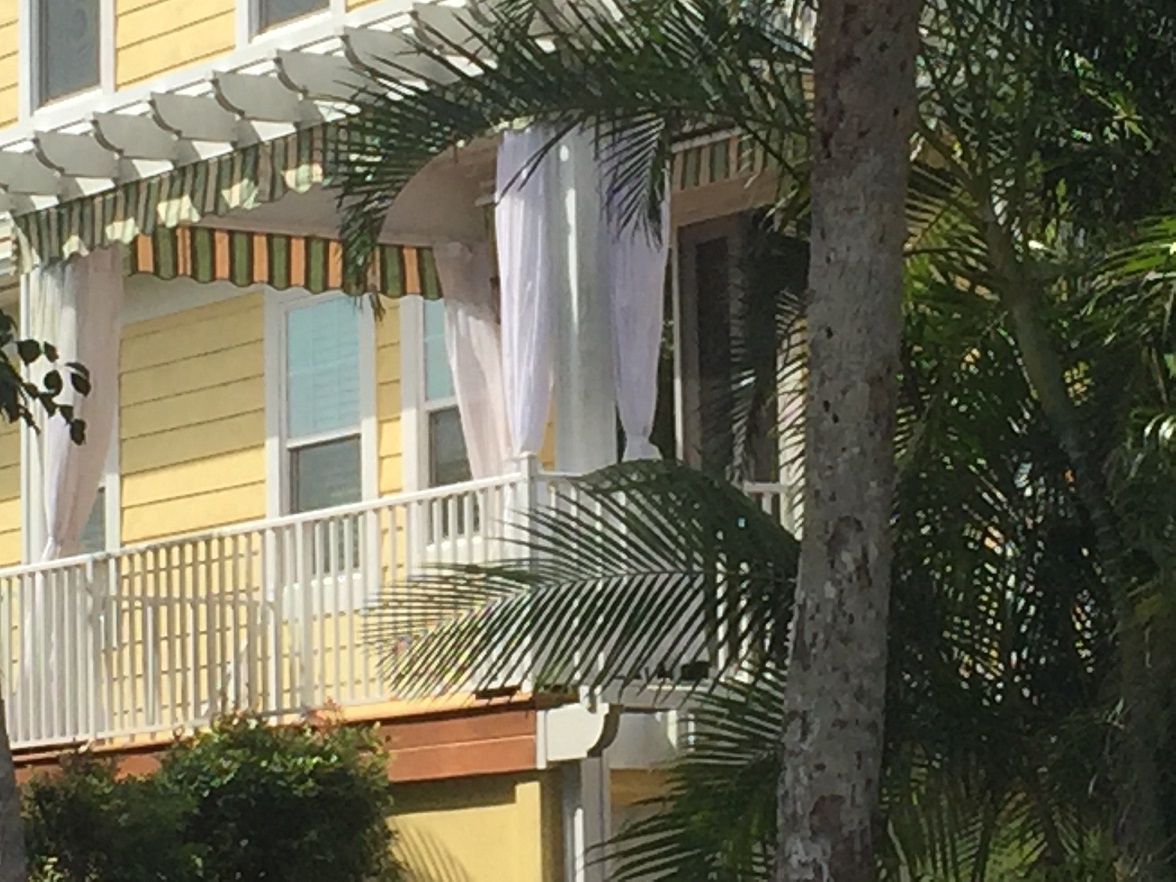 TAKE ON THAT PROJECT

Each of these projects can be completed easily and quickly. So whether one, or all, of these projects are on your Honey-Do list, we have you covered. For the best selection of curtain tracks, curtains, hardware and accessories, look no further than www.curtain-tracks.com.