As the popularity of Tesla electric vehicles increases and more of these cars hit the road, their owners are conscious of the challenges that come with the need to charge their vehicles regularly in their own garages. There are a number of products that have come to market that allow the unused cord of the charger to be hung when not in use. These products serves more like a cord rack where the cord can be coiled on the wall between uses.

We are pleased to share a project undertaken by a Tesla owner and Curtain-Tracks.com customer. Peter L. from Newberg, Oregon set out to tackle a challenge as he envisioned his DIY project. He wanted to create a solution that kept his charging cords off the ground during and after use. In addition, he preferred to keep the cord off his cars when charging as well. The position of his charging outlet made it a bit more challenging when charging in the garage bay that was not adjacent to the charging outlet.

In addition to preventing any potential car damage with the cord being drug across his cars, a suspended cord kept the cord off the floor. By keeping the cord dry and clean, it makes it a safer and tidier task to handle the cord before and after charging each day. By keeping the cord off the floor, it also reduces the wear on the cord that could result in damage to the insulation over time. This also improves the safety of long term use of the charger cable.

Peter envisioned a track and roller system that could be used to suspend the cord and moved around the perimeter of his garage to allow easy charging in two of the bays in his three car garage. One of his design steps included consulting with one of the knowledgeable reps at Curtain-Tracks.com to determine which product would best meet his needs for an “L” shaped track that included a 90 degree turn. Following the advice given, Peter opted to use the Industrial Track components to easily install and sturdy track system that would allow a trolley to easily move over the full length of the track while supporting a retractable tool balancer via a standard carrier. 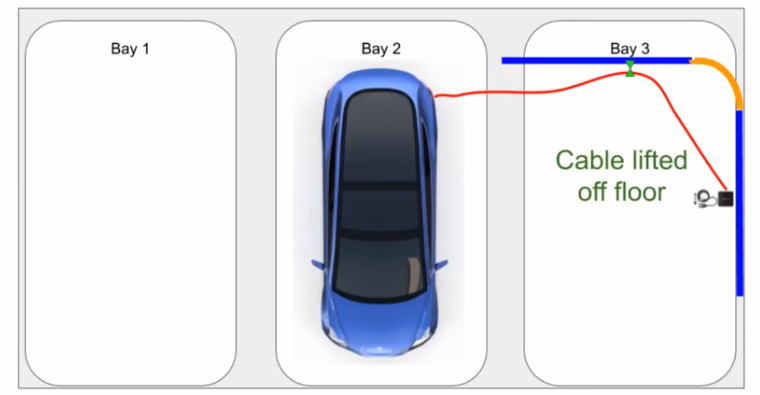 The video below does a terrific job of outlining the products he used for this Tesla charging cable management project, the steps he took during design and installation, and a review of how well it works to meet his needs. We really appreciate the effort this took to document the project, and highlighting the products Curtain-Tracks.com provided to assist with his project.

In order to replicate this exact project, the following industrial curtain track components would be needed:

Keep in mind that your application may be better served by mounting the track system to the ceiling instead of the wall as shown here. That would change the components to be ordered, substituting ceiling mount brackets instead of wall brackets. You may also notice that a lighter duty track was used lower on the wall to keep the hanging cable against the wall. Any number of tracks could work here, but we would suggest the 3120 track as a good option, with a 7120 carrier and 7127 end stops.

Thanks to Peter for sharing his project. We hope that this project may inspire other customers to think outside the box about how to leverage off-the-shelf hardware to tackle challenges. I you have questions regarding an idea and how a curtain track system may be suitable for an alternative application, we’re here to help. Whether you want to replicate this Tesla Charger project to something entirely different, Curtain-Tracks.com is here to help.Call (888) 434-7444 for a free consultation with one of our track system experts. #tesla #curtain-tracks.com